Posted at 10:00h in BC Tech Blog, TIAs by Cecilia Chun

BC’s tech ecosystem is known for its innovation its startups and increasingly for its unicorns. Less well known are the stories of BC’s tech exporters who have built great companies that bring the best of BC’s innovation to the world. This award acknowledges a technology company that is succeeding on the world stage through the export of technology developed in BC.

The Company of the Year – Export award is presented in partnership with EDC.

Boast.AI is a BC based company with a mission to accelerate the success of innovative companies by democratizing access to billions of dollars worth of R&D tax credits, innovation incentives, and non-dilutive capital so companies can fuel their growth while preserving equity and avoiding red-tape.  The traditional process of applying for research and development funding is laborious, complicated, and time-consuming.  It can take several days to submit an application, and sometimes years to receive the funding.  By automating this process, Boast.AI is able to significantly reduce the time it takes for these companies to access funding and move forward with their business priorities.

In recent years, Boast.AI has seen their global revenues steadily increase as they tap deeper into the global market for R&D funding.  The company believes that export market potential for Boast.AI export is over $185 billion.  From 2019 to 2020, the company went from $4.95 million to $10 million in export revenue. As they continue to scale and grow, Boast.AI has their sights set on international markets such as the UK, Australia, France, New Zealand, and Ireland.

GeoComply is the global leader in geolocation and compliance technology. Since launching in 2011, the company has quickly become the iGaming industry’s go-to solution for reliable, accurate and precise geolocation services. GeoComply’s patented and proprietary geolocation solution offers the highest level of accuracy and integrity as well as depth of security and ease of implementation.

Accurate geolocation compliance is one of the cornerstones of the booming US iGaming and sports-betting industries. With this demand across the border, nearly 100% of GeoComply revenues are generated from outside of Canada.  These markets are governed by strict state and federal regulations that require the bettor to be physically located within the borders of the state in which the wager legally exists.  GeoComply holds virtually all of the market for geolocation compliance in the US with all major operators such as DraftKings, FanDuel, Caesars, MGM as customers, making them a true Export success story. 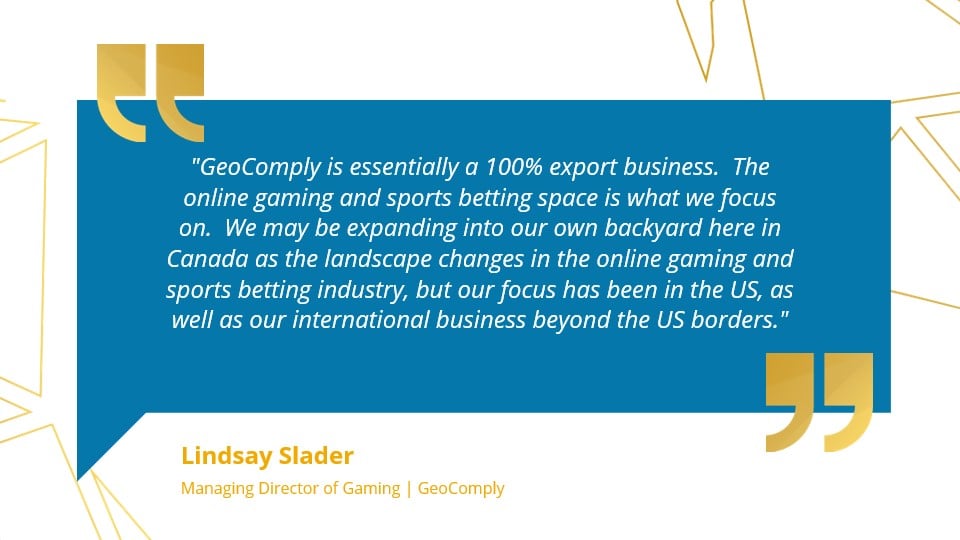 Invinity is the world’s leading manufacturer of large-scale Vanadium Flow Batteries or VFBs.  These state-of-the-art batteries are used to store power generated by renewable sources, and distribute it in an even, reliable way.  Unlike lithium-ion batteries which store electrochemical energy in solid form, vanadium flow batteries use a liquid electrolyte, stored in large tanks, and made of the chemical element vanadium dissolved in a stable, non-flammable, water-based solution.

A large proportion of Invinity’s manufactured products to date have been exported outside of Canada.  Invinity’s primary export markets are the United States, Great Britain, and Australia. The company also has a secondary focus in Europe and as well as some African and Asian markets. These markets were selected to maintain focus where the economic case for installing flow batteries was the most fertile and would provide the greatest impact. 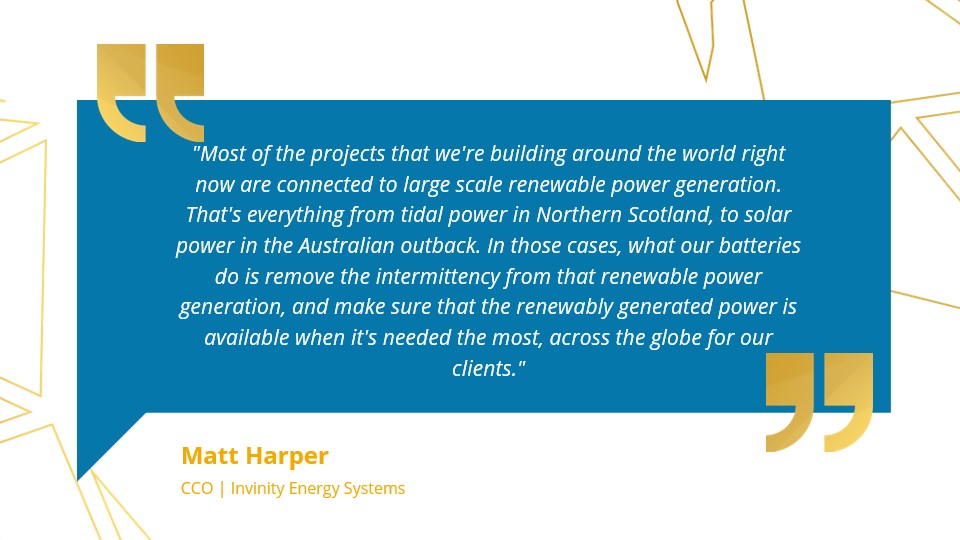 LMI Technologies manufactures the majority of its sensors from the company’s facility in Burnaby, BC, however 95% of what is produced there is exported outside of Canada to the US, Asia, and Europe.  LMI is highly responsive to global market demands for vision solutions and are continually working to make decisive moves that expand and consolidate their global presence.

Find in-depth reports developed through impact studies, surveys, and statistics-gathering initiatives. We merge trends reflected in the data with insights from tech leaders to guide decision-making and resource allocation across stakeholders.

Stay up-to-date with news and stories from the BC Tech Association and the tech industry at large. Have news to share? BC Tech Members can submit news releases, blogs and stories for free.

We are dedicated to connecting companies, developing talent, sharing stories, and advocating on behalf of tech companies to keep our industry thriving.